Lotus Petal Foundation: A story of Kushal Raj, how they help needy children to get an education; read the story now 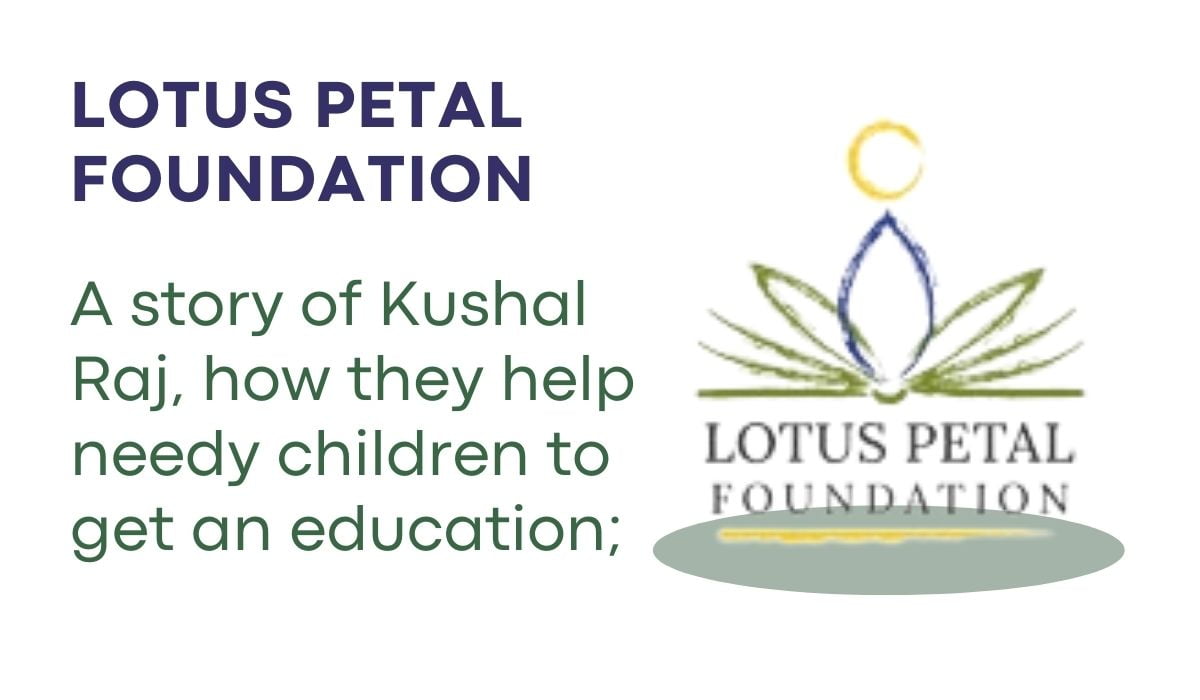 The Founding: On a cold winter morning in 2011, Kushal Raj Chakrovarty (48), a resident of Gurugram, was dropping his two daughters at school. On his way, he spotted two children dressed in uniform, walking to a local school near a temple. They had no winter wear, socks, or even shoes as they made their way through the harsh winds. “It was a jarring moment. In my arms, I had my two kids, who were well taken care of, and then there were these children, who didn’t even have the basics they needed to survive the cold,” Kushal recalls.

The next day, Kushal went to the school near the temple and found that what he had witnessed the previous day was the case of all the 250 children who studied there. So he handed out shoes and socks to the children to keep them warm. This one act of kindness eventually transformed into several small gestures, wherein Kushal began supporting local charities, NGOs, and schools with requirements such as water, electricity, and automated kitchens.

He says this was the informal inception of his NGO, Lotus Petals Foundation, which he initially funded from his pocket and then took a loan for.

A Problem to Solve

Over the years, Kushal’s social work made him privy to a common problem among children of low-income groups. He found that many of them in school were studying in classes far lower than their actual age.

“For example, a 14-year-old would be studying in Class 3. One boy had been in Class 5 for almost five years, and he was around 15-16 years old,” he explains. Kushal found that these children had become comfortable in non-profit schools, unwilling to go to government ones because the latter had poor infrastructure. “The kids would hang in the education system till they came of age and join their parents in whatever jobs they’re doing. They
are essentially foddered for the underbelly of society. They live in the ‘Millenium city’ and aspire to live or work in the tall glass buildings they see around them, but they don’t have the means to.”

He adds, “Moreover, once someone starts doing manual labor, it’s a sentence for life. As you grow older, your income decreases as your physical strength does.” So, Kushal set up a program called Pratishthan, an English medium school where children aged around 12 and 14 years could fast-track their education in a five-year program. Those who might lag in the education system due to fractured schooling are provided with vocational training and courses in personality development and language ability. They are also given soft-skill training and etiquette development to make job hiring easier based on education.

Kushal rented a room in a shopping arcade near his house and began with around six children, one math teacher, and three computers. The school follows the National Institute of Open Schooling (NIOS) board.
By 2016, Kushal and his six students had hit a milestone. The children graduated Class 10, and he quit his corporate job for good to dedicate all his time to their welfare. “I had the option to move to Sweden for my job, but I decided to stay back.”

In 2018, six students passed out from Class 12. Four of them are now employed as cashiers and in similar jobs, and one works in an MNC, having managed to move his family out of their tin home into a pucca house with a toilet and kitchen for themselves. The other student is currently a second-year medical student.

Around this time, more programs began taking shape, and neighbouring schools approached the foundation for help. These included Jeevika, a skill development programme focusing on senior secondary students to prepare them for the formal job market after leaving Class 12. Another project, Aarogya Wellness, is a healthcare programme that provides hygienic and nutritious meals, mental health counselling, yoga sessions, and more to children. The Sahyog Project collaborates with government schools to improve pre-existing infrastructure and assistance in academic
learning. Lotus Petals also has various scholarships for students to pursue higher education in medicine, engineering, and more. “We also help those who want to start scholarships in, say, the memory of their loved ones,” Kushal notes.

At the onset of the COVID-19 pandemic, the organisation also provided devices and full-day data packs to their students so they would not miss out on education. As many non-profits had to shut down, Kushal and his organisation took in their students. “We transitioned into hybrid schooling, where teachers teach from a cubicle, and students have the option of either attending from home or coming to the class,” he says. “We directly support around 1,200 students and 14 government schools under our programmes.”

In 2017, a friend’s donation helped Kushal buy five acres of land on the outskirts of Gurugram, where the organisation now plans to construct a new campus for the kids. “The idea is to scale up our existing infrastructure and programmes and widen our reach”. The campus opened for 600 students in April of 2022. It will eventually be big enough to provide education to at least 17,000 students making it one of the most prominent schools for underprivileged children in India. Lotus Petal has grown from educating and impacting six students to thousands and stays focused on changing the world, one child at a time.

1 thought on “Lotus Petal Foundation: A story of Kushal Raj, how they help needy children to get an education; read the story now”